Teenage kicks: how sport is repairing the damage of sectarian conflict

Sport has the capacity to break deeply-ingrained behaviour patterns and mindsets, to engage even the most complex individuals and to bring about positive change to entire communities. Few places need sport’s unique powers more than Derry/Londonderry.

The city in the north-west of Northern Ireland, close to the Irish border, is split in two by the River Foyle, physically dividing the Cityside (predominantly Republican/Catholic) and Waterside (mostly Loyalist/Protestant) areas.

The Peace Bridge, built in 2011, was part of a concerted recent attempt to foster unity in the city, but deep-set political and religious tensions are still an everyday reality for its citizens. Even the city’s name is the subject of bitter dispute.

In a park next to the Peace Bridge is St Columb’s Park House, an 18th century manor from which a variety of outreach programmes are run, all intended to make a positive difference and increase unity between the two communities.

One of them is a three-year project funded by Comic Relief called M-Powered, which is using martial arts as a vehicle for exploring personal development, youth empowerment, health and wellbeing, identity and conflict management withinthe most marginalised groups of young people in Derry/Londonderry.

The project is based mainly at the Strike Martial Arts Academy, run by Head Coach Daniel ‘Pinta’ Quigley. A highly respected figure locally, he is a four-time world kickboxing champion. 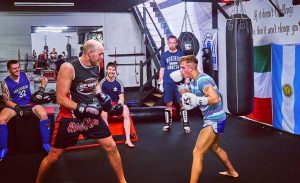 When the project began, he employed a highly unorthodox strategy to engage youngsters from some of the city’s most troubled areas.

To explain: there is a tradition in Northern Ireland,based around the Protestant celebration of the Twelfth of July, of building huge, towering bonfires. Catholic effigies or Irish flags are often burnt, which provokes tension, especially in ‘interface communities’ (borders between Catholic and Protestant areas). The bonfires are often hotspots for anti-social behaviour, vandalism and violence.

“We had been trying to engage with youth workers in these areas, but had been finding it difficult to get on board,” explains Pinta. “Myself and Shane drove up and just had a conversation about the benefits of kickboxing. We wanted to challenge young people’s reasons why they are getting into sectarianism by using kickboxing as a tool.

“Five of them just dropped everything and followed us up the street straight into the club. I felt like the Pied Piper! Many others from their group joined them the following week when they’d heard what it was all about. Some of them have now fought and competed all over Ireland.”

It wasn’t long before many young people from both communities were flourishing in their kickboxing. But Pinta was seeing enough harrowing evidence of damaging social issues in his athletes – including suicides, crime and violence – to know that he needed to do more to help them.

It was around this time that he first encountered Justin Coleman, Head of the National Alliance of Sport for the Desistance of Crime. Seeing the potential of the M-Powered project, Justin helped the team at Strike mould their offering in order to maximise its impact in combating some of the issues their young participants were experiencing.

The first change was to make the environment more welcoming to newcomers from both sides of the community’s divide. In a city characterised by overt symbolism and displays of identity, Pinta took what Shane describes as “a big, brave step” of putting up both the Irish AND British flags in the club, as well as many other nations’. The wearing of Celtic and Rangers shirts – banned in other cross-community clubs – is also accepted.

“It was to make it clear that there are no divisions here; everybody is welcome,” says Pinta (pictured left). “An important thing martial arts tries to promote is respect. The guys and girls know the rules when they come to Strike; you leave all the negative aspects at the door and you train together. To date there has never been an issue.” 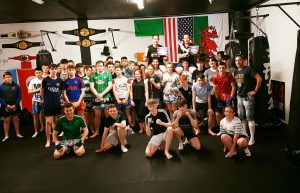 Justin delivered Theory of Change training which, Shane says, “got us really thinking outside the box”. It helped them break down things like how potential new members are welcomed into the club and their processes for raising each young person’s resilience, self-esteem, self-efficacy and positive identity.

That’s where Ben Littleton from 2nd Chance Group’s Pause & Engage programme came in. He delivered the Level 3 mentoring qualification to ten key members of Strike who wanted to “give something back” by becoming coaches and ‘change-makers’, working with the at-risk youngsters on the M-Powered programme. The training turned out to be an eye-opening experience for them.

Shane reflects: “It challenged them on the questions they would be asking young people in groups and one-to-one mentoring situations. It was quite emotional for a lot of them. They had never touched on these difficult topics before – sport was their only way of dealing with the anxieties and knock-on effects of living within the conflict.”

Justin adds: “It was an amazing process. It gave them a chance to speak to each other in a way they hadn’t before and learn things about each other that they never knew, even though they’ve worked together for years. It gave them a sense of unity, achievement and confidence.”

The mentoring process is now just getting started with the 80 young people on the project (increasing to 120 next year). Every new starter on M-Powered now gets assigned a mentor, with each of the ten mentors looking after up to eight young kickboxers each.

The current once-a-month personal development sessions, which are mandatory for all participants, will be increased to weekly individual and group mentoring sessions.

There is now a ‘mentoring room’ within Strike Academy, but in case anyone finds this intimidating, mentoring can also be conducted in the gym during a punchbag session or on a walk. 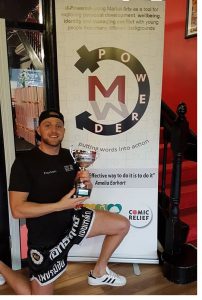 Ben from Pause & Engage explains: “Previously, there was mentoring of sorts, but it was off-the-cuff. The team now understands the science behind it, how these young people think, how to change those ways of thinking, what their triggers may be and are able to provide support that wasn’t there before.”

What the young people on the project now have is not only a world-class kickboxing programme, but a holistic support network provided by mentors who can provide empathy and understanding, as they come from the same troubled, conflict-ridden background.

“We’ll now know more about what’s happening in their lives,” explains Shane. “We’ll be able to signpost them to other programmes in the city. They’ll be able to talk about all the personal and community problems that are literally happening outside the front door of Strike, but aren’t currently being discussed inside.”

The community conflict and its knock-on effects of suicide, bereavement, alcohol and drug abuse, violence and anti-social behaviour are an ongoing battle. But at Strikethey are now better equipped to provide sanctuary and respite from what’s going on beyond its doors.

“The young people have told me that coming to Strike has allowed them to channel their aggression and have a strong ‘family’ around them,” says Pinta.

“Martial arts is a growing sport over here and it’s my first love, but it could be any sport that’s having this effect. It’s using sport as a tool to bring young people in and working with them holistically on sporting abilities, behaviour, personal development, job and life prospects.”

Justin concludes: “The guys on this project are putting themselves in situations few people would want to be in. They’re using sport to deal with real issues head-on. They have got something I would dearly love to bottle, spread across the rest of the country and say ‘This is how you do it’.